AAR: The Upton Chronicles: Quest for the Symbols of Radiance

Deep in the jungle lie the Symbols of Radiance. Legends and rumors claim the Symbols bring immunity from disease, longevity of life, and unusually good fortune. The problem? A cannibalistic cult controls them, led by the brutal Chief Ekwueme, his son, Chinwendo, and the witch doctor, Akachi.

An aging and sick Sir Reginald Upton hears about the Symbols, sees the personal possibilities, and cobbles together an expedition of loyal assistants. His son, Jimmy, wants the Symbols for...other (hello, financial opportunity?!)...reasons and gathers his own group of adventurous souls.

Two groups leave for the jungle, intent on retrieving the Symbols. Will either be successful, or will they be tomorrow's cannibal stew?

Wiley Games Fistful of Lead, plus Tales of Horror.

Deep in the jungle, the cannibal village emerges from the foliage. At the far end of the area lies a uniquely carved cave complex set into a mountainous facade. 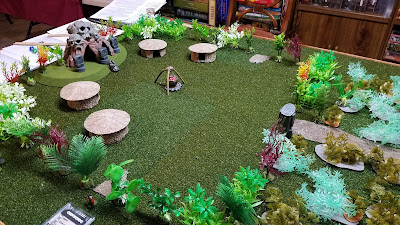 The village was minding its own business when out of the jungle erupted foreigners and gunfire! Chief Ekwueme and Shaman Akachi were basking in the glows of the the Symbols, while the rest milled as only extras will... 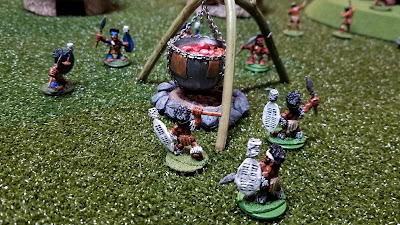 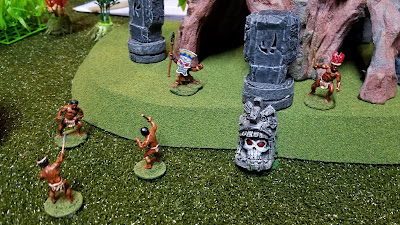 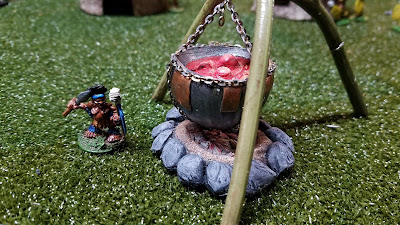 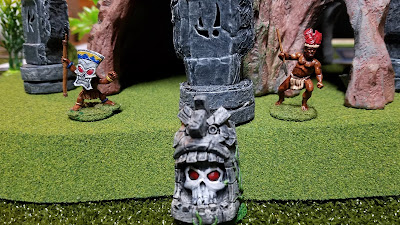 The initial fire favored the interlopers, but the scrum's tide quickly turned. There weren't a lot of wounds or shock taken in this this game. It was either kill or be killed. 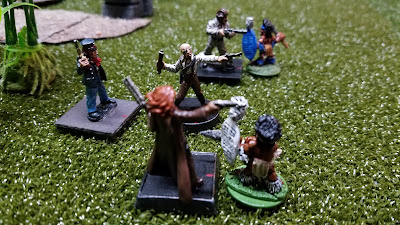 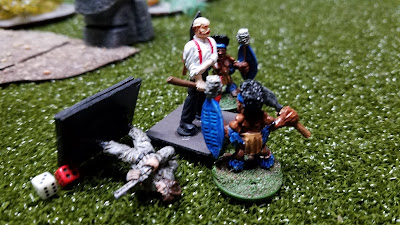 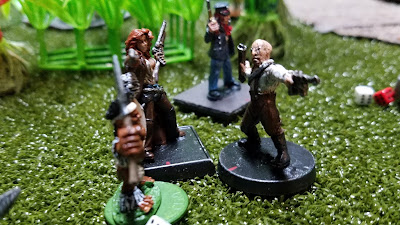 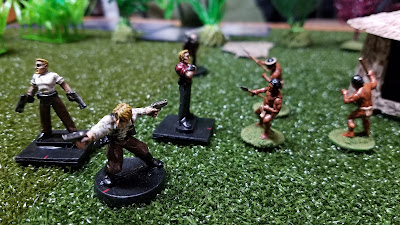 Shaman Akachi never did deliver a spell.  His diminutive stature failed to strike fear into the hearts of either Jimmy or Sir Reginald.  Fortunately for him, his fellow cannibals more than compensated with blunt force. 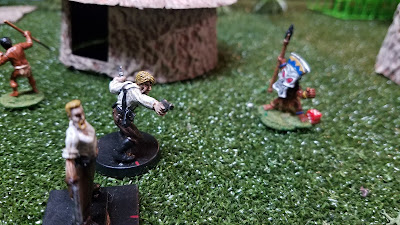 Professor Edelstein's beloved Native American peace pipe proved to be an outstanding club...until it wasn't.  The least combative figure on the table held off several attacks before succumbing to the natives. 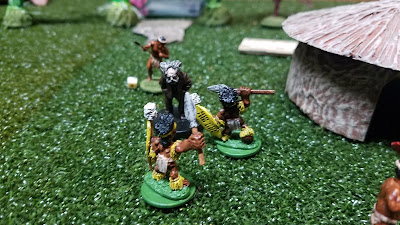 Airman Jones, out of ammo, wounded, and stunned, bravely sacrificed himself to save Sir Reginald's life. 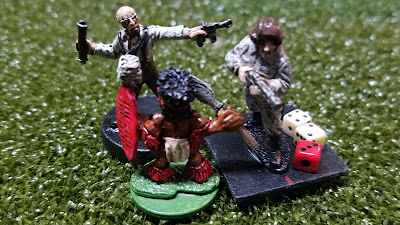 Fire Marshal Bill and his mighty fire axe took out multiple foes, but the last one got him in the short ribs. 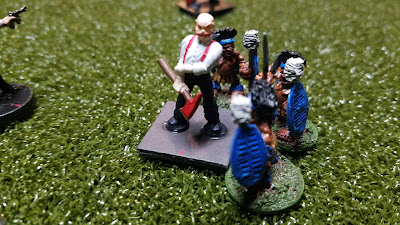 The end was near and it looked dire. With everyone else down, Sir Reginald had to think fast or become tomorrow's stew. Surrounded by foes and not knowing the language, what can he do?! 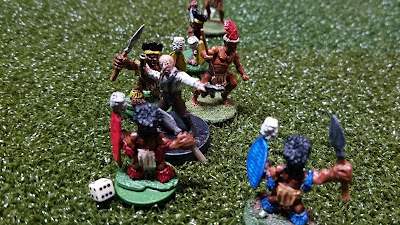 Stay tuned, dear reader, for the next exciting chapter!

It was a typical day on the fringes of Man's territory. A roving band of Orcs, hoping to pillage a nearby Human settlement, closes in. Word had spread of this, causing alarm among the Wood Elves. Their lands were being used by the foul Orcs and this would not stand. The Orc marauders met the forward elements of an Elven scouting party next to a crossroad. 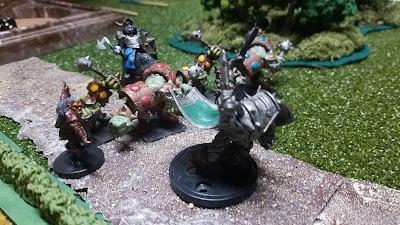 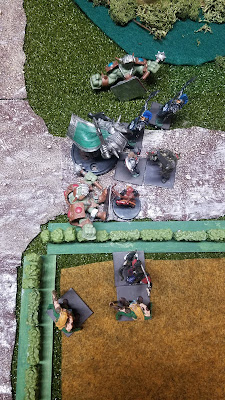 The fight ended with the Orcs losing too many troops and fleeing the table. Evidently longbows, in the hands of skilled archers, are deadly. Who knew?!

The Goblins were late to the party. They were sent to back-up the Orcs and help with the pillaging. The Elves had been delayed as well. Consisting of duelists, they were ready for a scrum.


The game was over fairly quickly. The Goblins lost their leader, making it hard for them to consistently activate. The Sneak Goblins wound up getting stuck in the woods and were thus ineffective. They eventually all ran to fight another day.
Posted by Petru5 at 2:16 PM No comments:

We got to try out the new game Marvel: Crisis Protocol this Wednesday. My buddy, Chuck, bought the game and graciously offered to throw it onto the table. I provided the terrain: an urban warehouse complex.

The plot was that there were shards of the Cosmic Cube scattered around the site that our supers needed to collect. The team that possessed enough of the pieces over the course of the game, won.

It was a close game. The heroes led most of the night, but the defeat of the Hulk and Cap to Doc Oc's Arm Lasers changed the tide for a villain victory.  Spidey's ability to use his webs to throw enemies and things was impressive and fun...unless you were Ultron.

All in all, a great game. Very easy to learn and play. Chuck's models were painted beautifully, which only helps the game's prominence.  I'd play it again!  Enjoy the pics! 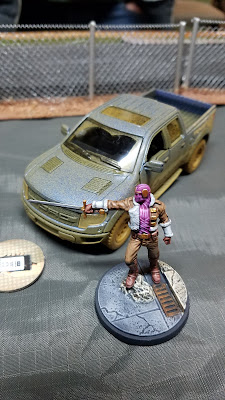 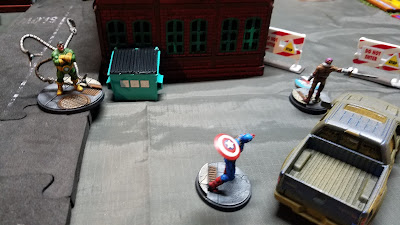 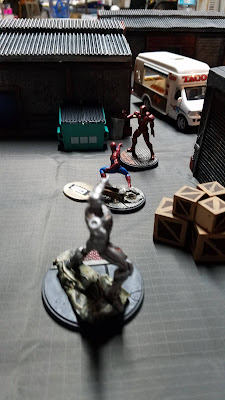 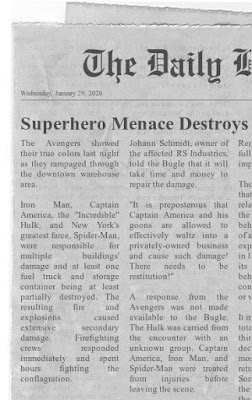 I fell off the blog wagon again...

I've recently had a hankering for some medieval Japanese, skirmish-level gaming. For years, I've owned a light set of rules titled Song of Katana and Ninja by a fellow named Rich Jones. It is based out of Ganesha Games's Song of system, but had too many holes to be a viable platform.

Enter Yume no Bushi. This is the full-blown rules by Mr. Jones based on the aforementioned Song of system. It is a much more complete set of rules and allows you to play with both historical and fantastic Japanese units. It was produced in 2010 by Surf Shack Productions.

Mr. Jones has another system of rules for this period with the same name, but for 42mm miniatures.  While I have a copy of the rules, I haven't played them.

The AAR is actually two weeks worth of gaming. The first session featured my friend, Donnie, and me hashing out the rules and learning the system.  The second session included Terry, Jen, and myself.

Both sessions featured the same plot. Ninja have been hired to assassinate a local monk. The local lord has sent a small contingent of samurai to guard said monk at his temple compound.


The first session was an even match in force sizes (60 points). I used ninja. Donnie was the samurai and monk.  These rules utilize some neat special abilities to capture the feel of different units. Samurai are harder to kill and can be very deadly. Ninja can be elusive and can confound their opponents with what we jokingly call "Handwavium"...basically mesmerizing their opponent with seemingly mystical hand movements.


Long story short: The ninja were successful in slaying the monk, but at a cost of 2/3 of their forces. I was able to keep Donnie's force moving by using Ukemi, the ninja art of moving away from combat with acrobatic flair. There were several cinematic moments by both sides and we had a fun evening.

This time, there were two clans of ninjas vying for the honor of killing the monk (poor guy). I played the samurai, while Terry and Jen both played ninja. I was doubled on points, although the monk did cut into that total. Having forgot my green table mat, this session occurred in the snowy Japanese winter. 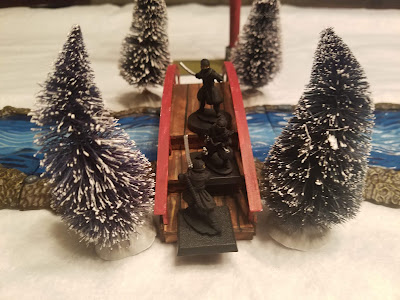 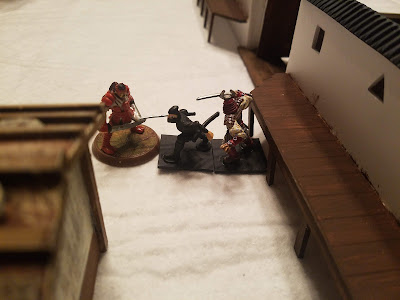 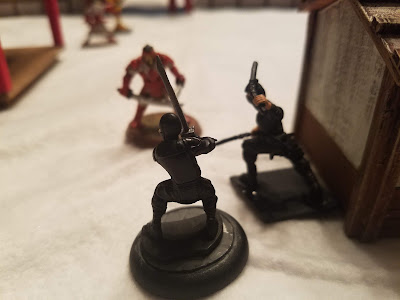 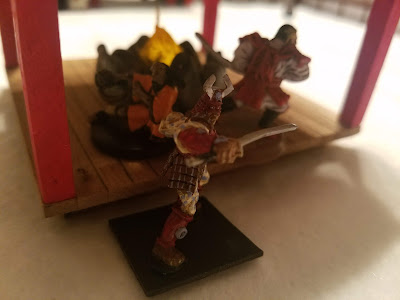 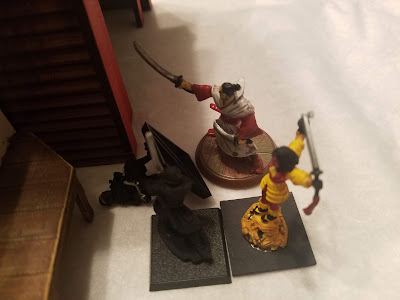 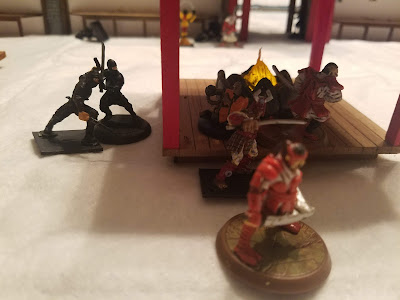 Long story short: This time around, the game became more of a slog. I was able to hold off both ninja factions for an extended time. The monk's plight was still "up in the air" when we called it for the night. Jen made effective use of both her shuriken and "Handwavium" skills, while Terry's poor dice rolls kept him from making too much of an impact. Again, there were some cool moments and the superior samurai armor made its presence felt a couple of times (to the ninjas' dismay)

Overall impressions of this rule set is that they are very serviceable for the time period, but you really have to utilize the special skills or risk becoming mired in the typical Song of slog. I'll be using these again with some of the more fantastic elements in my collection.
Posted by Petru5 at 3:45 PM 1 comment: